Meeting of minds on mentoring program

Last month, I was part of a contingent of superintendents and BOCES leaders from the Capital Region invited to the Governor’s Mansion in Albany to meet with Matilda Raffa Cuomo, the Former First Lady of New York to learn more about the state’s new Youth Mentoring Program—an initiative introduced by Governor Andrew Cuomo during his 2015 State of the State address. 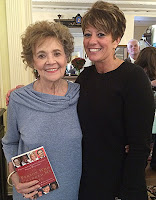 It’s not surprising that the governor would invite Mrs. Cuomo—his mother and a longtime advocate and leader in the area of youth mentoring—to be involved in jump-starting a mentoring program for the state’s most at-risk children. Approximately 30 years ago, at the request of her husband, the late Gov. Mario Cuomo, she was instrumental in establishing the New York State Mentoring Program—the nation’s first state-wide, school based, one-to-one mentoring program. Mrs. Cuomo later founded Mentoring USA to further the goals of the New York State Mentoring program. Since its inception, Mentoring USA has expanded nationally and internationally with mentoring affiliates in Italy, Spain, Bulgaria and Latvia.

I listened with great interest as Mrs. Cuomo spoke about the purpose of the state’s new mentoring program, which is to provide career and life guidance to children who are at risk of dropping out of school. She explained that the state—not school districts (sigh of relief)—will be responsible for identifying, training and matching business-based mentors with students from high-needs districts throughout New York. Mrs. Cuomo invited us to express our need for mentoring in schools, as well as discuss the logistics of a program, including how it would work in our schools, or how it might fit with existing student mentoring programs that some schools already have in place.

Since the October meeting, I have been contacted by the mentoring program director for upstate who is interested in working with our district because, as I learned during the meeting, Watervliet participated in the original program initiated by then-Gov. Mario Cuomo three decades ago. The program’s advisory council is seeking local businesses to partner with our schools and recommend individuals to serve as mentors for our students on a weekly basis in a supervised school environment.

The merits of mentoring


Significant research exists that supports the value of mentoring. Consider this: Mentoring has profound positive effects on two early warning signs that a student may be at risk for dropping out of school:


In addition to better school attendance and a better chance of going on to higher education, mentored youth maintain better attitudes toward school. (The Role of Risk, 2013)

To reiterate her belief in mentoring, Mrs. Cuomo shared a story and a picture of a young girl that she had mentored years ago who has since grown, married, graduated from college and has a successful career.

I, too, believe in the power of mentoring having experienced it from both angles. As a new educator in the Hudson City School District, I had a mentor to help me navigate the day-to-day challenges of teaching and to celebrate my successes in the classroom. As a doctoral candidate when I was feeling overwhelmed and questioning if I could succeed in the program, I had a coach who provided consistent encouragement and reminded me on a regular basis that I was more than capable of completing my doctorate. And, I did!

Throughout my years as Watervliet High School principal and even now as superintendent, when mentoring students, I emulate the mentors I have had over the years and always keep in mind that the support of just one caring adult can make a difference for students who are struggling to succeed personally or academically—especially children in high-needs environments.

It was an honor to meet with Mrs. Cuomo and to be asked to provide input from an educator’s perspective about the implementation of the state’s youth mentoring program. If you are interested in volunteering to be a mentor, I encourage you to visit the New York State Youth Mentoring Program website to learn more. All potential mentors will receive extensive training and must submit to a background check. Mentoring students requires commitment, but believe me, helping even one child is the best reward!
Posted by Dr. Lori S. Caplan at 6:49 AM No comments:

Dr. Lori S. Caplan
I am a life-long urban educator who graduated from Hudson High School in 1984. I earned my bachelor's degree from Adelphi University and my master's from The College of Saint Rose. I then returned to the Hudson City School District where I first taught Grade 6 then AIS English for 11 years and served as head track and field coach for four years. In 2003, I accepted an administrative role as the assistant principal at Central Park Middle School in the Schenectady City School District. I came to the Watervliet City School District in 2005 and had the honor of serving as the WJSHS principal for seven years. In 2010, I received a doctorate in educational leadership from Sage College and was appointed the Watervliet Superintendent of Schools in January 2012.